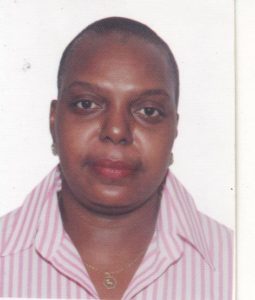 She started her education in Surulere Baptist Primary School, Surulere in 1966 and completed her secondary education at Reagan Memorial Baptist Girls Secondary School, Yaba, Lagos in 1977. She continued her education in Lagos State College of Science and Technology, Isolo, Lagos (COSTEC) now Lagos State Polytechnic in 1978 for her Basic Studies and due to her quest for more knowledge, in 1980 she left the shores of Nigeria for United Kingdom. While there, she attended the prestigious College of Journalism, Fleet street, London and obtained a Higher Diploma in Journalism and Mass Communications. Unrelenting, she continued her education at Sunderland University, Sunderland, North-East England, where she graduated with B.A (HONS) in Communication Studies in 1985.

She returned to Nigeria in 1986 for her National Youth Service (NYSC) and had her primary assignment with Lagos State Broadcasting Corporation (LTV8) now Lagos Television (LTV) and afterwards worked briefly with Digital Holdings Nigeria Limited before joining the Lagos State Unified Local Government Service in January 1988 as Information Officer I. While in the Unified Local Government Service, she worked in the defunct Ikorodu, Surulere, Mushin, Agege, Ibeju-lekki, Eti-osa, Lagos Island East and West, all as Head of Information Unit in the Office of the Executive Chairman, before being transferred into the Main Stream of the State Civil Service, as Assistant Director, Press & Public Relations with effect from June 2006. Having put in many years of dedicated service, in the Local Government and Main Stream, formulating, strategizing and implementing public sector policies, plans and programmes especially in the area of effective information dissemination and media strategy management, she has demonstrated her commitment, leadership qualities and unalloyed loyalty in various capacities at both levels (State and Local as consultant, resource person, representational and other ad hoc committee duties assigned to her.

A pragmatic public relations guru (who would have loved to be an investigative Journalist), in her almost 8 years’ service in Agege Local Government, published a Compendium on the Local Government and also did other publications notable amongst them are “Riding on the Wheels of Success”, “Salvage work in Agege”, “Turning Agege Around” and she single handedly financed and published “Agege Patriots” a compendium of “who is who” in Agege Local Govt Council 1954-2002. This publication happened to be the 5th in the series that she researched and it took her three years of dedication and hard work to complete. Surprisingly, this publication was first of its kind and the last to be compiled and published for the benefit of the populace. Some of these publications are available for use in some University’s and School’s Libraries as reference books. Earlier while in the now defunct Ikorodu and Surulere Local Governments, she researched into their historical background and profile, the outcome forms part of the referenced information used for diaries, publications and other documents of the respective local governments.

Her passion for public relations and communications endeared her to remain attuned to this noble profession even when she had the opportunity to change to other professional line back in her local government days. She has steadily progressed and excelled as a career public servant over the last 29years in the service of Lagos State to become Director, Public Affairs. To date, in the mainstream, she has worked in the Office of the Surveyor General (OSG), Epe Divisional Office of the Ministry of Information and Strategy, Ministry of Transportation (MOT), Ministry of Physical Planning & Urban Development (MPP&UD), Ministry of Commerce, Industry and Cooperatives (MCIC) and presently Ministry of Economic Planning and Budget (MEPB) all as Head of Unit.

Her affinity for writing was brought to the fore again while in the MPP&UD, she co-compiled, edited and published the Ministry’s sponsored yearly Ministerial’ Press Briefing booklets between 2012-2015. She also introduced E-Newsletter (2013-2015), a monthly news bulletin about the activities and events of the Ministry which was forwarded online to selected members of the State Executive Council (EXCO), General Managers of Agencies under the Ministry, Management and entire Staff of the Ministry and its Agencies. Yet again in MCIC, she compiled, edited and produced a handbook on Ministry of Commerce Industry and Cooperatives…. “Profile, Prospects and Investment Opportunities” for public consumption. Also in MCIC and MEPB, she introduced daily E-newspaper monitoring which is being forwarded to management and interested members of staff via their email.

A vibrant, intelligent and articulate person, she has over the years attended many professional trainings, workshops and seminars including leadership course of the Daystar Christian Centre, that has helped in contributing to her present-day status. She is an amiable and very compassionate individual who selflessly desire to assist her subordinates and the less privileged in the quintessence virtue of charity. She continues to demonstrate leadership qualities while impacting positively on her subordinates by encouraging them to improve on their academic potentials and livelihood. She is a member of the Nigerian Institute of Public Relations and a member of Nigerian Institute of Management (Chartered).

She loves cooking, writing, travelling, sports and dancing. A devout Christian, she is happily married and blessed with lovely children.

Powered by WordPress | Designed by TieLabs
© Copyright 2023, All Rights Reserved