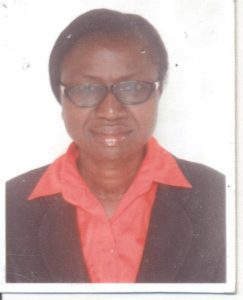 She attended numerous primary schools, between 1968 and 1974. She however finished from Omoleye Nursery and Primary School, Palmgrove, Lagos in 1974 where she obtained the First School Leaving Certificate. For Her Secondary education, she attended  Ahmadiyya Secondary Commercial School, Orile Agege ,now  Saka Tinubu Memorial High School from 1974 – 1980 and Anwal – ul – Islam College Oniwaya Agege, where she obtained the West African School Certificate in 1981.

She continued her education at the Lagos State Polytechnic between 1983 and 1985 where she obtained an Ordinary Diploma in Banking. She did her three months Internship with Union Bank Plc. Alagbon House Branch, Broad Street, Lagos and another year of internship with United Bank of Africa (Plc), Lagos East Branch Opposite General Hospital Lagos. In 1988 she was employed by Lagos Building Investment Corporation (LBIC) as a Banking Supervisor. In her quest for more knowledge while still in the employment of LBIC, she proceeded to Ondo State Polytechnic and obtained Higher National Diploma in Accountancy in 1999 and her Master in Business Administration in 2004 at Ondo State University, Akungba, Ondo State.

She got double incremental award in year 2000 after 15years of meritorious service with the Lagos Building Investment Co. Ltd (LBIC) and thereafter, transferred her service to the mainstream of Lagos State Civil Service in July 2004. She was posted to the State Treasury Office where she worked in various units before being redeployed to Ministry of Housing (2013 to 2014) and later transferred out to Lagos State Liaison Office, Abuja (2014 to 2016) as Head of Accounts, and back to Lagos Council for Arts and Culture also as Head of Accounts (August 2016 – January 2017) and presently with Ministry of Economic, Planning and Budget, as Director of Finance.